In this blog post we are going to see, how to achieve dynamic polymorphism in c# using interfaces through a small game simulator called “War”. 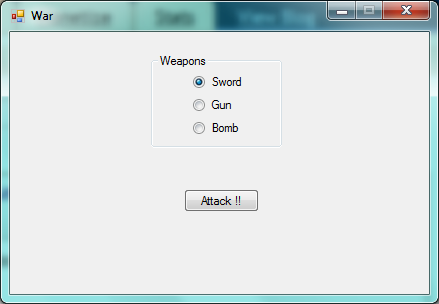 The simulator is simple and straight forward to play. The user just need to select a weapon and click on “Attack”.

Let me explain some theoretical background about “Dynamic Polymorphism” before dive into implementing the Game simulator. To put in a simple terms, Dynamic Polymorphism means changing the behavior at run time. Let us see an example of what does it mean. If a dog smells a cat, it will bark and if it smells a food, it will salivate. Here, the smelling sense of the dog is same. But depending on what does it smell, it change its behavior. Hope now you are aware of what is mean by dynamic polymorphism. Just stop reading and think what is the dynamic polymorphic behavior here in the “War” simulator.

Yes, you are absolutely correct!! The Attacking behavior is the dynamic polymorphic behavior. The behavior of attack button will vary with respect to the weapon the user has chosen.

Fine.. Lets dive into the code!!

The Attack() method will show a message box with a text saying the weapon name being used.

Now the stage is set for the real show. Let us wire the code of MainForm.cs and make the “War” simulator.

In this blog we have seen a basic real time example on implementing dynamic polymorphism. You can download the source code of this sample from here.