One of the impressive aspects of functional programming is that it will enable you to write simple and expressive code to solve complex problems. If you are wondering, how is it possible? Well, It is because, Functional Programming provides a lot of higher level abstractions to solve the problem in hand and avoids the need of writing lot of boilerplate & plumbing code. As a developer, you will be more productive and deliver the solution faster.

In this blog post, we are going to see the application of the above statements by implementing an API Gateway Pattern in F# using Rx and Suave.

This blog post is my contribution towards fsharp advent calendar 2015. Do check out other great fsharp posts there

Let’s assume that you are asked to build the backend for the below GitHub user profile screen. 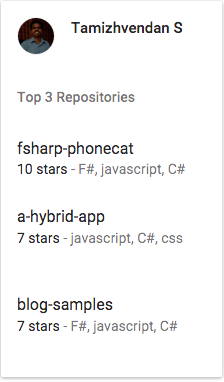 This profile screen has 3 components

Now as a developer, you have two options

In the implementation that we are going to see, we will be using FSharp.Control.Reactive, an extension and wrapper for using the Reactive Extensions (Rx) with F#

Then install the following NuGet packages

In Functional Reactive Programming(FRP) every action is treated as stream. So, first step in implementing an API Gateway is modeling each HTTP request&response as stream.

Open Http.fs file and update it as below

The getResponseAsync function makes use of Http.fs, an HTTP Client library for F#, to fire the HTTP GET request and returns the HTTP response asynchronously.

The HTTP response has been modeled as either Ok with the response content for all the responses with the status code 200 and everything else is treated as Error for simplicity.

In the final line, we create a stream (aka Observable) from asynchronous response using the function Observable.ofAsync from FSharp.Control.Reactive

As all the GitHub API requests require user agent, we are adding one before firing the request.

Upon successful response from GitHub, the next step is parsing the JSON response and transforming the parsed response as per the Profile screen requirements.

To parse the response, we are going to leverage the powerful tool of FSharp called JsonTypeProvider

The JSON Type Provider provides statically typed access to JSON documents. It takes a sample document as an input. Here in our case, it is user.json and repos.json

Get the sample response from GitHub using its User API and Repos API and save the response in user.json and repos.json respectively.

With the help of JsonTypeProvider, we can now easily parse the raw JSON response to its equivalent types in just a few lines of code in GitHub.fs!

As GitHub.fs is an abstraction of GitHub let’s put their URLs also here in the same file

We have used partial application of function sprintf in the userUrl and reposUrl function here, so both of these functions take username as its parameter implicitly

The JsonValue.Parse parses the raw string JSON to a type called JsonValue and the JsonExtensions.Properties function takes a JsonValue and returns the key and value pairs of all the properties in the JSON as tuples. As we are interested only in the Keys here, we just pluck that value alone using the function fst

Great! Now we are done with parsing the JSON response of all the three APIs and creating it’s equivalent types. The next step is doing some business transformation

One of the requirements of the Profile Screen is that we need to show only the top 3 popular repositories based on the stars received by the repository. Let’s implement it

Then write functions to get the value from HttpResponse and create this profile output.

All the above functions except toProfile take HttpResponse as its last parameter implicitly.

In reposResponseToPopularRepos function, if the repos API request is successful, we parse the response to its equivalent type and then pick only three of them based on star count and in the case of an error we just return an empty array.

The last function toProfile is a merge function which takes a tuple of HttpResponse (of User API request) and Repository [] and creates a Profile record if the response is successful. In case of an error, it just returns None

Note: To keep this blog post simple, I am handling the errors using empty arrays and None. It can be extended using ROP

Let me quickly summarize what we have done so far. We have created two abstractions.

With the help of these abstractions now we are going to build the API Gateway to get the profile object.

It is just a skeleton which just describes the what function does. Let’s start its implementation.

In Rx world, everything is a stream. So, the first step is converting GitHub User API request to stream

Then we need top three popular repositories as a stream

Except the last line, everything is same as that of creating userStream. If you check GitHub repos API it just returns all the repos associated with the given username. But what we need is only top three of them based on the number of stars it has received.

We already have a function reposResponseToPopularRepos in GitHub.fs which does the job of picking the top three repos from the raw JSON. As the response is in the form Rx stream, we need to get the value from the stream and then we need to apply this function and that’s what the Observable.map does. It is very similar to Array.map and LINQ Select

The next operation is a little complex. i.e. finding out the programming languages being used in these popular repositories. To get this GitHub API, we need to fire three separate requests to the Languages API for each repository and then merge the results back with the corresponding repository.

To implement this with the help of Rx streams, we need to understand the flatMap function of Rx.

The map function has the following signature

The flatMap function has the following signature

This function is also called as bind function in the functional programming world. If you would like to know further on this topic, I strongly recommend this blog series by the fsharp great, Scott Wlaschin

Back to the problem in hand, we need to fire three HTTP GET Requests to get back the languages associated with the each of the top three popular repos. In terms of the flatMap function, it boils down to three functions of the following syntax

We can implement the solution using three flatMap functions using the above syntax. But, we can make it more granular by creating a new variant of flatMap function to achieve this in a more straightforward way.

i.e three flatMap can be rewritten as

Let’s name it as flatMap2 and add the implementation of it in the file ObservableExtensions.fs

Here is the representation of what this function does

It’s hard to get it right in a single shot. So, let’s see it in detail step by step by applying it to our use case here

Great! You got it right!!

Let’s use this flatMap2 function and complete the implementation of profile API gateway.

The flatmap2 function takes the function toRepoWithLanguagesStream which converts the GitHubUserRepos.Root type to IObservable<Repository> to find out the languages associated with the given popular repositories.

The toRepoWithLanguagesStream function does the following

The Observable.map function takes only one input, but here we need to two inputs. So, With the help of partial application, we created an intermediate function by partially applying the first parameter alone

The languageResponseToRepoWithLanguages function has been already defined in the GitHub.fs file.

The last step of the getProfile function is combining this popularReposStream with the userStream created earlier and return the Profile type asynchronously.

The Observable.zip function takes two streams as its input, then merges the output of each stream and return the output as a tuple. From this tuple, we have used Observable.map function to map it a Profile type using the toProfile function created earlier in GitHub.fs

The last functions TaskObservableExtensions.ToTask and Async.AwaitTask does the conversion of IObservable to async by converting it to a Task first and then the Task to async

This function is a testimonial on How functional programming helps to write less, robust, and readable code to solve a complex problem

The final step is exposing what we have done so far as an API to the outside world. We are going to implement this using Suave

Open ApiGateway.fs file and update it as below

The JSON is a utility function (WebPart in the world of Suave) which takes any type, serialize it to JSON format and return it as JSON HTTP response.

The getProfile function is the API WebPart which calls our backend API gateway implementation and pass the received response to the JSON WebPart defined before.

In case if there is no profile available (Remember? we return empty types in case of errors), we just return 404 with the message that the given username is not found.

Then update the Program.fs to write the web server code

Thanks to Suave for it’s lightweight and low-ceremony offerings in creating an API. We just exposed it in two lines!

Hit F5 and access the API at http://localhost:8083/api/profile/{github-username} Bingo!!

The above quote summarizes the gist of this blog post. Functional Programming will help you think better. You can get the source code associated with the blog post in my blog-samples GitHub repository

Wish you a happy and prosperous new year